Pizza Champ is a win for Elmwood’s Adam Altnether and Chris Killing.


For most of his adult life, Chris Kelling would head into work donning a stiffly pressed shirt, suit blazer and, sometimes, a pocket square. Though not employer issued, it was the de facto uniform of his job as a hospitality professional at some of the country’s top fine-dining restaurants and one he wore with pride as the co-owner and front-of-house face of the sleek Maplewood restaurant Elmwood.

Today, Kelling’s work ensemble is quite different. Instead of thumbing through his closet and peeling off the dry-cleaning plastic from one of his suit coats, he grabs a pair of jeans and a T-shirt that will be covered by an apron the second he walks into the Pizza Champ (2657 Lyle Avenue, Maplewood) kitchen. More likely to be covered in flour than Barolo, he spends his days making dough for the fast-casual pizzeria he and business partner Adam Altnether opened in January.

Though he had zero prior kitchen experience, Kelling is responsible for making the restaurant’s foundational ingredient: the dough. To do so, he goes in before anyone else and finishes his day as the small staff starts to arrive for service. In his past life, he’d be greeting the team and preparing for lineup. Now, he sometimes sees only one or two faces before heading home by 3 pm 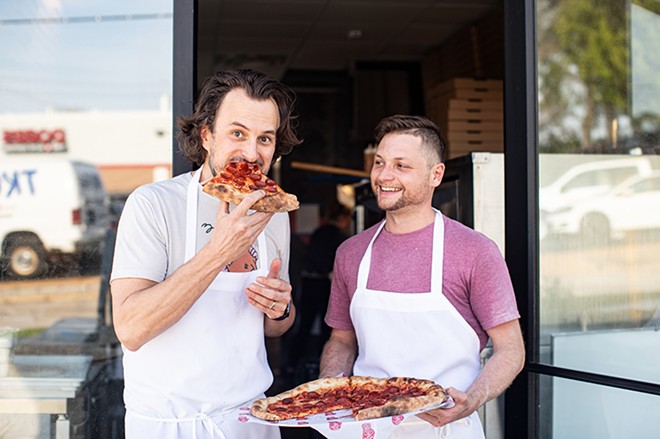 Chris Kelling and Adam Altnether had to get creative during the pandemic.

Kelling’s wardrobe adjustments demonstrate how seismic the changes to the restaurant industry have been in the wake of the pandemic. In January 2019, Kelling and Altnether – an acclaimed chef who also traded in his wardrobe for T-shirts – were riding the high of Elmwood’s debut in the St. Louis food scene. The pair envisioned the restaurant as an elegant hybrid of upscale dining and a neighborhood bar and set a mission to be the standard bearers for hospitality in the region, something they had dreamed of working together at Gerard Craft’s Niche Food Group. For a while, they were doing it, garnering acclaim for excellent food, top wine and bar talent, and a service style that bordered on artistry.

A year later, the pandemic left Kelling and Altnether scrambling to figure out how to survive as a business. They knew that the dining experience their restaurant prided itself on was gone indefinitely, but rather than dwell on that loss, they worked together to find a new way to serve.

That new way, Pizza Champ, was not originally meant to be a permanent solution, though it wasn’t conceived out of the blue. Even before they opened Elmwood, Kelling and Altnether talked about opening a nostalgic, family-oriented pizzeria complete with arcade games, parmesan and pepper-flake shakers, and pitchers of soda, but plans to do so fell through when the pandemic hit. However, their pizza idea remained, and they decided to start selling pies out of Elmwood as a pop-up called Pizza Champ in August 2020. It was a runaway success, and as the pandemic dragged on, they realized they were on to a concept that would long outlive the necessities of the moment. 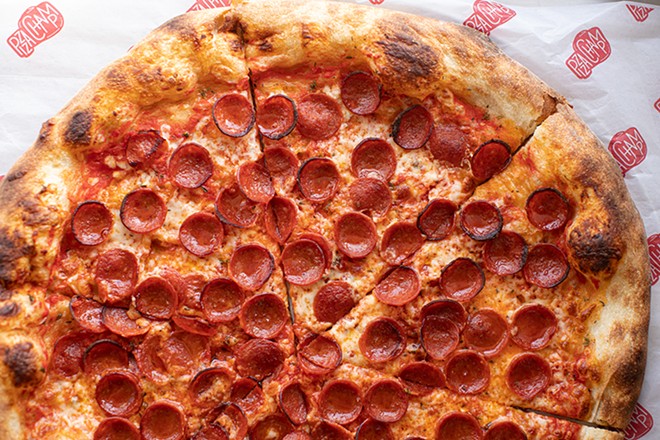 By the winter of their first year, Kelling and Altnether had been approached by Cory and Karen King of Side Project Brewing for a new concept they were opening across the street from their Maplewood brewery. The venue – a small, fast-casual spot that would serve as a place to grab a beer and some snacks – seemed like the perfect home for Pizza Champ, prompting Kelling and Altenether to enthusiastically sign on.

Though Side Project is not yet in the space, Pizza Champ has been operating as a takeout-only spot since January (the brewery will begin service when the building’s patio opens, likely next month). Even without that in-person experience, the pizzeria has already endeared itself to the community, quickly becoming a go-to pick-up spot for weekly pizza nights, pizza parties and general pie-centric cravings.

It’s easy to see why. Altnether has brought his chef’s sensibilities to Pizza Champ’s pies, creating a wonderfully chewy sourdough crust that puffs up around the edges to form a stunning perimeter. And he does not skimp on quality, insisting on making all the sauces, sausage and ricotta from scratch and thoughtfully sourcing ingredients he cannot make himself. 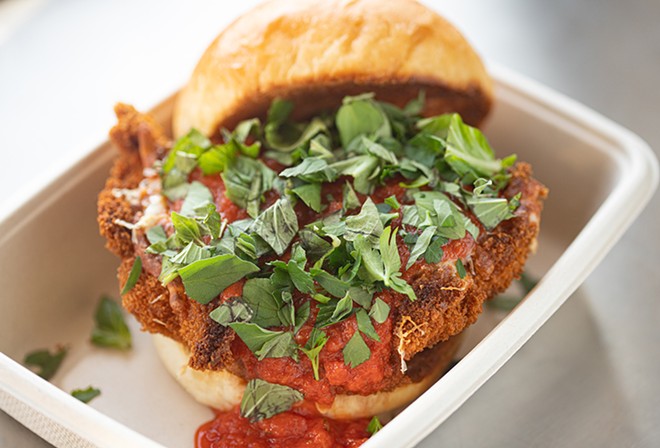 Pizza Champ offers a handful of sandwiches, including the “Chicken Parm.”

What makes Pizza Champ so successful, though, is quality without preciousness. The Triple Pepperoni, for instance, is the Platonic form of a New York-style pepperoni pie; the sauce is zesty with hints of oregano, the cheese is orange from the pepperoni’s glorious paprika-laden grease, and the sausage curls up around the edges to form little cups that contain this savory red-tinged nectar. Slices are cut large enough to fold and stuff into your mouth like a proud Brooklynite. If you were to look up “pepperoni pizza” in the dictionary, this is what you’d find.

The Grilled Kale and Ricotta pie is as close as Pizza Champ gets to a gourmet offering. Still, it’s not stuffy, consisting of a piquant red sauce enlivened with chili flakes, olive-oil-roasted kale crisps from the oven and dollops of fresh ricotta cheese accented with preserved lemon and garlic. The cheese’s richness is cut with the fiery sauce, making this a beautifully balanced dish.

You see Pizza Champ’s whimsy in its specialty pies. The Buffalo Chicken Pizza features hunks of fried chicken tossed in house-made hot sauce that is spicy but balanced with a subtle sweetness that makes it approachable for those who can’t handle too much heat. Blue cheese crumbles and celery also mitigate the burn. The Taco Pizza is nothing short of breathtaking. A generous portion of seasoned ground beef is spread across the pizza and accented with searing-hot serrano cream, onions, tomatoes, shredded lettuce and tortilla strips. As a nice touch, the latter two toppings are served in separate containers, so they remain crisp.

The “Grilled Broccoli Caesar” is a nod to Altnether and Kelling’s fine dining background.

Pizza Champ is not only a winner in the pie category. The restaurant sells chicken sandwiches, such as a simple crispy version garnished with pickles, lettuce and mayonnaise, and a parmesan one covered in molten cheese, tangy red sauce and fresh basil. Both feature fried chicken, rather than breast meat, which results in a juicier product. Finally, one of the restaurant’s best dishes has nothing to do with chicken or pizza; the Grilled Broccoli Caesar pairs the beautifully charred vegetable with rich, lemony dressing, fried shallots, fronds of fresh dill and bread crumbs. The dish is so perfect you wonder why romaine ever cornered the market on the classic salad.

That Caesar salad would not be out of place at Elmwood, nor would the level of hospitality that Kelling, Altnether and their entire team cram into the brief interactions they have with guests at their delightful spot. Though it’s not the path they thought they’d be walking down, Pizza Champ proves that this pair is talented through and through – no matter how you dress them up.

We are always hungry for tips and feedback. Email the author at [email protected]

How Her Family Suffered A Devastating Loss