Hoarding in Thailand & Lebanon, protests in Iraq: How the Ukraine war threatens a global food crisis

In Lebanon, the government has only about a month’s wheat supply left. In Iraq, protests had broken out because of an unprecedented rise in the prices of food products. Hungary has banned all grain imports and the United Nations World Food Program has had to cut ration supplies to Yemen.

As Russia invaded Ukraine, one of the world’s largest breadbaskets, the worst surge in global food prices since the Great Recession looms large over the world. Moscow’s war against Ukraine could spark crisis-level hikes, inflame the scourge of world hunger and spark political turmoil far from the conflict zone.

Food prices across the world were already rising fast amid supply chain disruptions and pandemic-related inflation. However, some prices — especially that of wheat — have shot through the roof because of the Ukraine crisis, upending calculations of the world’s available food supply and leading to the rationing of flour in parts of the Middle East.

As alarm bells ring across the world because of the Ukraine crisis, we take a look at how deep the crisis is, its impact on the global food supplies and if India can play a role to mitigate the effects.

How bad is the crisis?

Ukraine and Russia account for nearly 30 per cent of wheat, 17 per cent of corn and over half of sunflower seed oil exports across the world. The conflict-induced bottlenecks at Black Sea ports — where cargo vessels have been struck by Russian rockets — and other complications of the war have slammed Ukrainian exports. The boycott of Russian ports by shipping companies and the knock-on effects of sanctions have also disrupted the flow of foods and feeds from Russia — creating problems that could grow as the Kremlin now threatens to impose export controls on some food commodities.

Now, what the invasion has already done is push wheat prices by 70 per cent in the last month. Wheat prices shot to a record $ 12.94 per bushel. And experts believe that the situation is only about to get worse.

The graph demonstrates how the price of wheat surged over time. (Source: Axios Visual)

A recently published report by the Food and Agriculture Organization (FAO) of the United Nations estimates food and feed prices could surge to up to 22 per cent above the already elevated levels due to the war. Now putting that in terms of real-life inflation, costs are approaching the global food crisis of 2007 and 2008, when droughts, the rise of biofuels and a barrage of trade protectionism merged into the worst food inflation since the grain crisis of the 1970s .

In the short run, the FAO says, large grower countries — Australia, Argentina, India and the United States — could make up for a portion of the grain shortfalls from Ukraine and Russia. However, the FAO’s preliminary assessment is that, due to the war, 20 per cent to 30 per cent of wheat, corn and sunflower seed crops will either not be planted or go unharvested during Ukraine’s 2022-2023 season.

The number of people on the edge of famine had jumped to 44 million from 27 million in 2019, the UN’s World Food Program said this month. The conflict between Russia and Ukraine, which both play crucial roles in the carefully calibrated system of global food production, just stands to make the situation worse. The World Food Program’s costs have already increased by $ 71 million a month, enough to cut daily rations for 3.8 million people.

In February, grocery prices in the US were already up 8.6 per cent over a year prior, the largest increase in 40 years, according to government data. Economists expect the war to further inflate those prices. Earlier this month, the United Nations said that the war’s impact on the global food market alone could cause an additional 7.6 million to 13.1 million people to go hungry.

Now, add fertilisers to the equation

If you thought that wheat and oil is at the center of the crisis when it comes to sanctions on Russia, Moscow is also a major exporter of fertilizer, the price of which has already been soaring.

Russia is the world’s largest fertiliser exporter, providing about 15 per cent of the world supply. This month, Russia told its fertiliser producers to halt exports. Sanctions already were making such transactions difficult. Sanctions also have hit Russia’s closest ally, Belarus, a leading producer of potash-based fertiliser, critical for many major crops, including soybeans and corn.

The price of natural gas is only aggravating the issue as fertilizer producers outside Russia and Belarus need gas to make nitrogen-based products like urea. Urea has been trading near $ 1,000 per metric ton, about four times the price at the start of 2021.

Prices of most fertilisers around the world have now more than doubled or tripled in price over the past year. Brazil, the world’s largest producer of soybeans, nearly half its potash fertilizer from Russia and Belarus. It now has just three months of stock left. The national soybean farmers association has instructed members to use less fertilizer, if any, this season.

On Monday, Russian fertiliser and coal billionaire Andrey Melnichenko broke with President Vladimir Putin and called for peace in Ukraine. Talking to news agency Reuters, Melnichenko said: “The war has already led to soaring prices in fertilisers which are no longer affordable to farmers. Now it will lead to even higher food inflation in Europe and likely food shortages in the world’s poorest countries. “

Crisis looms large over the world

It seems like a re-run of the 2007-08 crisis as countries are turning to trade protectionism to guard their food supplies.

Since Russia invaded Ukraine, Indonesia has set new limits on palm oil exports to control prices; Hungary has banned all grain exports last week; Serbia has said that it would ban exports of wheat, corn, flour and cooking oil. On Thursday, Egypt, which imports almost 80 per cent of its wheat from Russia and Ukraine, imposed controls on grain exports as the price of subsidized bread has already started to creep up.

Added to the uncertainties brought about by the war, Ukraine has also banned the export of meat, rye, oats, buckwheat, sugar, millet and salt, and introduced some restrictions on wheat and corn. Reuters reported citing the Interfax news agency that Russia may temporarily ban grain and sugar exports to a group of ex-Soviet countries.

Armenia, Mongolia, Kazakhstan and Eritrea have imported virtually all of their wheat from Russia and Ukraine. Aggravating the situation is that China, the world’s biggest producer and consumer of wheat, is expected to buy much more than what it purchases from world markets this year as severe flooding last year had delayed most of its planting. In some quarters, a sense of panic is already building. In Turkey, a run on sunflower oil saw desperate shoppers pick supermarket supplies clean in viral videos shared on Turkish social media. 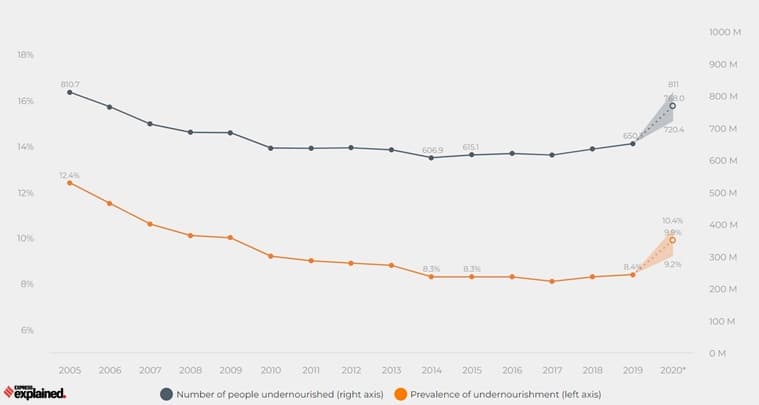 Experts have also warned that higher food prices could trigger global unrest. During the 2007-2008 crisis, riots broke out from Haiti to Bangladesh. The social uprisings of the Arab Spring also took place against a backdrop of public angst over the high cost of food. Cut to 2022, similar signs are beginning to show. In Iraq, protests broke out over surging prices, Al Jazeera reported. “The rise in prices is strangling us, whether it is bread or other food products,” a retired teacher Hassan Kazem told news agency AFP.

“We can barely make ends meet.”

Tunisia was struggling to pay for some food imports even before the war and the situation now is just pushing the country towards an economic collapse. Inflation has already set off protests in Morocco and is helping stir renewed unrest and violent crackdowns in Sudan. Countries affected by conflict, including Yemen, Syria, South Sudan and Ethiopia, are already facing severe hunger emergencies that experts fear could quickly worsen. In Afghanistan, aid workers warn that the humanitarian crisis has already been exacerbated by the war in Ukraine, making it more difficult to feed the roughly 23 million Afghans — more than half the population — who do not have enough to eat.

Russian and Ukrainian supply of wheat and other agricultural products are not easily replaceable in the world. Supply chain constraints and the coronavirus pandemic has already caused prices to spike and the Russian invasion has just made things worse. 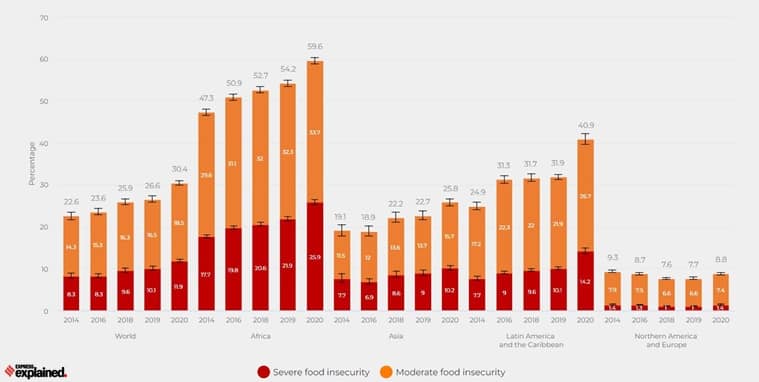 The graph shows how moderate or severe food insecurity has been climbing slowly for six years and now affects more than 30 percent of the world population. (Source: United Nations)

Between 2019 and 2022, the number of people at the brink of famine rose from 27 million to 44 million, with an additional 232 million people one step behind that category, David Beasley, executive director of the UN World Food Program, wrote in The Washington Post. The agency, which delivers emergency food aid, was already paying 30 per cent more for supplies than it was in 2019, amounting to an additional $ 50 million every month, Beasley wrote. “If the Black Sea transport corridors are disrupted further by this burgeoning war, transport prices will spike in lockstep, doubling or even tripling,” he added.

What the invasion has done is lay bare the consequences of a major war in the era of globalization as economists and experts expect worse as the effect cascades.

Where does India fit into this picture?

There are winners, losers, and collateral beneficiaries of every war and the ongoing shortage of food products can turn out to be an opportunity for Indian farmers. India has already exported over 6 million tonnes (mt) of wheat during April-January 2021-22. The same goes for rice, where non-basmati exports touched 14 mt in April-January and surpassed the 13.1 mt record for the whole of 2020-21. Even corn shipments are on course to reach 3.5-4 mt, levels last seen in 2013-14.

The soaring international prices have opened up export possibilities for Indian wheat, so much so that the government might not have to undertake significant MSP procurement this time.