At first, the ‘guides’ for the evening are an entangled, giggly mass, like only teenaged girls manage to form. But as the participants of the walk gather at Al Gulzar, near Old Delhi’s Jama Masjid, the mass shakes itself out, separates. “Good evening, I am Shabana, and I will lead your Shahjahanabad food walk today,” one of the girls walks forward.

Shabana and her five friends live at a ‘rain basera’, a Delhi government shelter home, in Urdu Park, a stone’s throw from Jama Masjid. Before the shelter home was built in 2010, they lived on the streets. While they grew up literally in the shadow of the magnificent mosque, the girls knew little about it, or about the teeming lanes that radiate from the Masjid in all directions, bursting at the seams with their history and their present.

But now, after three months of training by some non-profits, the girls are set to conduct food walks in these very lanes.

While one such walk covers eateries and ‘reris‘(handcarts) offering non-vegetarian food from Urdu Bazaar to Matia Mahal, the other is for vegetarian eateries from Dariba Kalan to Fatehpuri Masjid. A total of nine shelter home girls, students of Class 8 and 9, have been trained. Their first walk was held on Sunday, September 19, conducted by Shabana, Varsha and Saba Rehman, with three more – Amna, Chandni and Sabina – tagging along and occasionally chipping in.

One by one, Shabana, Varsha and Amna tell participants about famous or historical shops, their best dishes, and hours of operation. They also cover unique snacks sold on handcarts in this area, such as long chirey (a type of fritters) and mohabbat ka sharbat (watermelon milk shake).

“Long chirey were originally sold on the steps of the Jama Masjid, but now they have moved down into the lanes. Centuries ago, someone who saw the dish for the first time said they looked like birds (chire) and the name stuck, ”Varsha tells her guests. 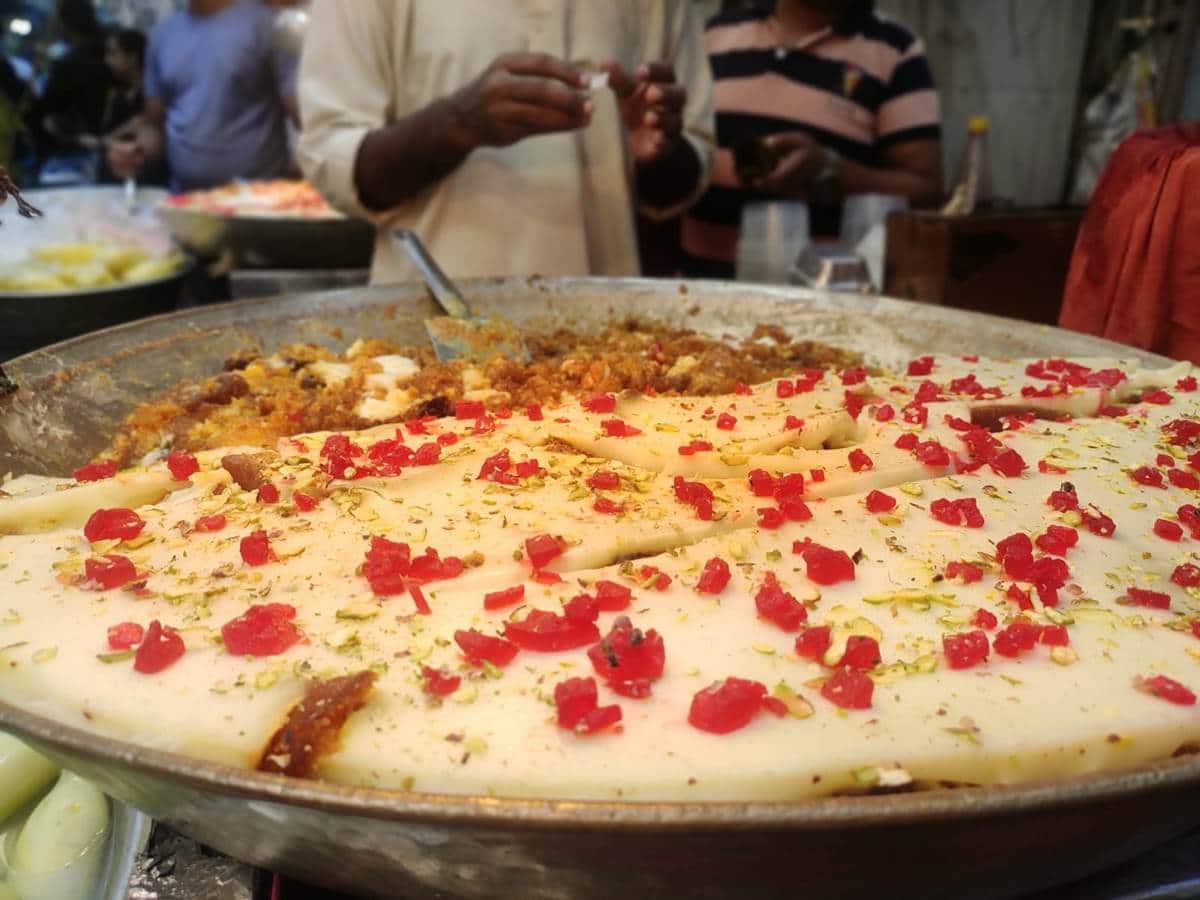 The famous Shahi Tukda of Old Delhi. The girls tell participants about famous or historical shops, their best dishes, and hours of operation. They also cover unique snacks sold on handcarts in this area. (Express photo)

“The person who came up with mohabbat ka sharbat devised the dish with a lot of love, and hence it is named so. It is also called sukoon ka sharbat (the relief syrup), because on a hot Delhi afternoon, it will bring you real sukoon, “ informs Amna.

The walk also includes nuggets of history about the areas. One of the first thing Shabana tells the five participants is that Urdu Bazaar is called so because it was once a major market of Urdu books.

At the end of the walk, the three girls are paid Rs 1,000 each. As the number of participants grows, so will their earnings.

The food walks project is led by We The Change; and supported by non-profits Purani Dilli Walon ki Baatein and Business and Community Foundation (BCF); the CSR wing of PVR Nest; and the arts and culture portal Sahapedia. On the first walk, the money to the girls was given out by Dr Amita Joseh, lawyer and BCF member.

Farheen Naaz, founder of We The Change, says the need for the project was felt as life in the shelter home, always precarious, was pushed close to the edge by Covid-19. 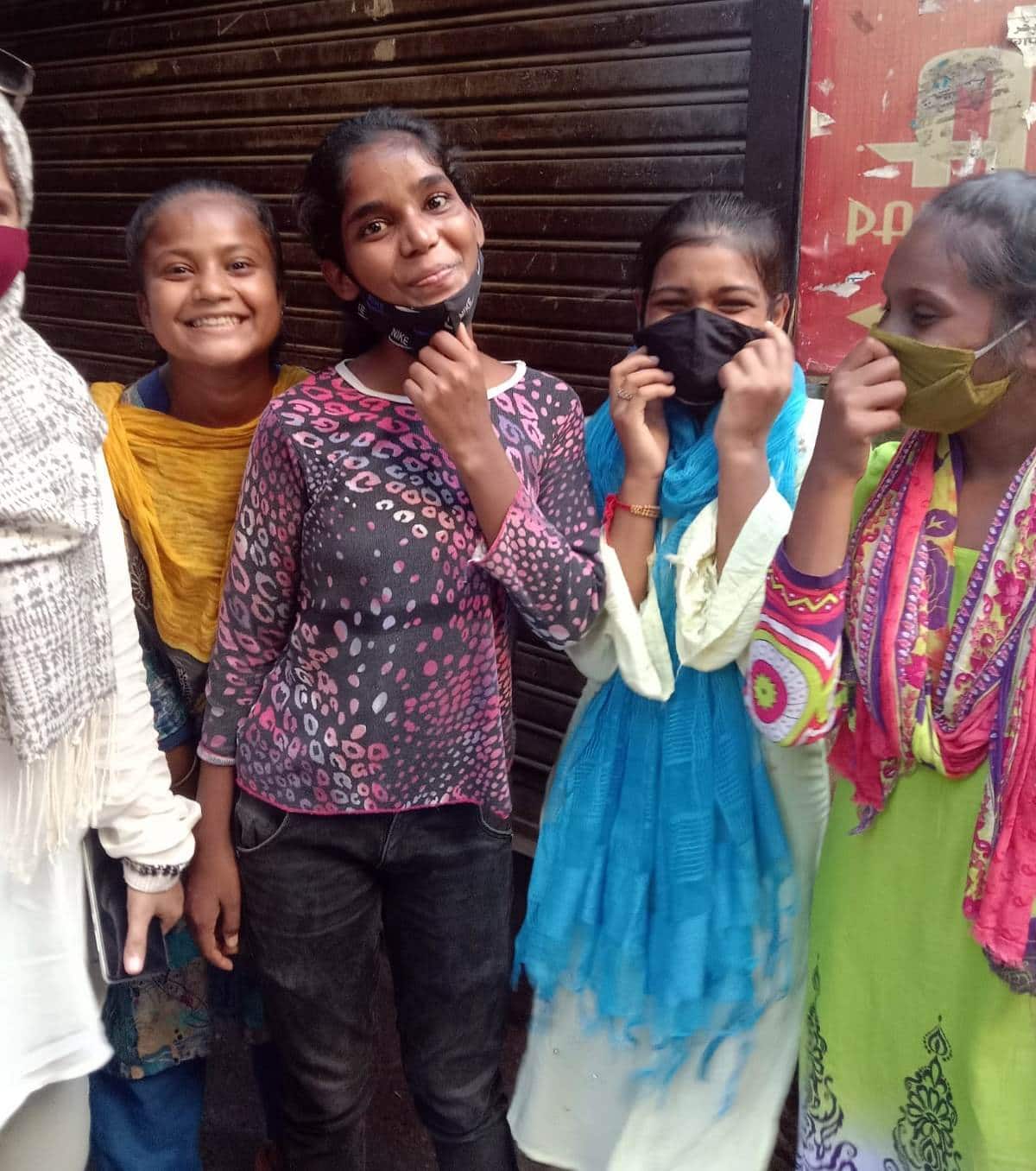 The guides on their first walk in September 2021. (Express photo)

The girls’ parents to various low-paying jobs. Of the six out on Sunday, the mother of two don’t work, one is a sweeper, one a guard at a nearby hospital, one sells cigarette-paan by the Jama Masjid wall, while another also worked as a security guard, but lost her job during the pandemic. Their fathers were either rickshaw-pullers or had small shops, but many lost their means of income during the lockdown. Varsha’s father is dead. The dad of one girl – she did not want her name specified for this – is quarrelsome and regularly gets into trouble with relatives and employers.

While the girls all attend government schools, during the lockdown, online classes were an impractical proposition. They would collect worksheets, but struggle doing them on their own.

“Living in the shelter home, the girls have an insecure existence. Many of the men drink, drug abuse is common even among kids. Covid lockdown, and the attendant loss of income and school closure, meant more uncertainty, more chances of their lives tipping over. We wanted to train them in something that would not just help them earn, but also keep them productively engaged, ”says Naaz, who conducted the training.

The shelter home is inside the Urdu Park grounds. There is one large room, with beds placed side-by-side in two rows. The beds are meant for 99 women, their daughters and babies. Above the beds, sheets have been tied to build alcoves. Boxes and various containers are piled beneath the beds. Men and older boys sleep outside. Another room in the compound serves as a primary school.

“Iske pehle humne sadak ki zindagi dekhi hai. Ghar shayad hamari kismat mein nahin hai (Before this, we knew the life of streets. A home is probably not in our destiny), ”Chandni says. “Par mehnat kar rahein hain (But we are working hard), ”she brightens.

In August 2021, Naaz and the nine girls were felicitated by the Delhi government for finishing their training. But according to Naaz, when she first visited the shelter for the program, the going looked really tough.

“After the first two days, it was clear that before any skill-training, we had to change how the girls see themselves. They considered themselves ‘shelter home people’. They felt no connection with the world outside. I realized we first needed to teach them that the neighborhood belongs to them, and they to it, ”says Naaz, a 32-year-old education and skill development professional.

So, the girls were enrolled in rugby training. A former shelter home child who is now a professional rugby player was roped in to teach. “The sport taught them the concept of team work and interdependence, and brought in a sense of community. Then we moved to lifeskills coaching. We taught them how to groom themselves, conduct themselves with confidence. These nine girls showed the most initiative, ”Naaz adds.

After this came the Shahjahanabad visits. “At first, we would just stare at the clothes and earrings in Meena Bazaar. We laughed at the heritage stuff Didi was teaching us. But slowly, we realized what we had been missing out on. There is so much history associated with this area, tourists from the world flock to it, but it was our home and we knew nothing of it, ”says Chandni.

“Can you believe it, I have lived by the Jama Masjid all my life and yet never been up its tower,” adds Amna.

“Training for the walk made us aware of baahar ki duniya (world outside the shelter home). Of course, we like the fact that we can make money out of it, but more than that, what we like is that we have learnt something new, ”says Sabina.

A lot of women in the shelter home beg for a living. One of them, who did not want to give her name, joins the conversation. “I begged for many years and was heavily into drugs, before I cleaned up my act and now work as a security guard. You know, I had grown comfortable begging because that was all I knew. The very thought of a job seemed scary, simply not for me. It was at the de-addiction center that I accepted the idea that I too could work to earn money. I am glad these girls already have the concept of gainful employment, ”she says.

At the end of the first walk, Joseph, who attended it, tells the girls they have done well, but must now explore the area on their own and come up with interesting additions on the route.

The Delhi government’s Chandni Chowk redevelopment project plans to keep certain food hubs functional till midnight. We want that by then all the girls are polished enough to lead a walk alone. They can then serve as examples for other children. We were very particular we wanted girls as leads. If streets are to be made safer for women, we need confident young girls showing the way, ”Joseph says.

Walking back to the shelter after the walk, the girls decide to chill on the Jama Masjid steps for a while. Saba reveals she had a special reason for volunteering to lead the walk today. “There has been no money at home for some days. Yesterday, my dad had to sell three packets of cooking oil we get from the government. Now, I can hand over Rs 1,000 to them. “

Amna describes how when they were younger, they came to the mosque during Ramzan to beg iftaar goodies. “The guards knew we were here to beg, so they wouldn’t let us enter. We would grab the hand or saari pallu of any adult entering the mosque to pass off as their children. Once inside, we would apologize and run off, ”she grins. “But only when we were really young, now we never beg,” she adds.

It is getting late, and the girls need to be home to start on chores. As they walk away, they are planning to visit the mosque someday and climb the tower. Outsiders once, they now have a foot in.