I was angered, but not surprised, by the news that Kellogg’s is trying to wriggle out of new junk food rules that mean some of its more sugary products cannot be prominently displayed in our supermarkets.

The rules target foods that are high in calories, saturated fat, sugar and salt (HFSS), banning them from high-profile locations such as aisle ends.

Kellogg’s, which is a cereal offender when it comes to loading its products with sugar, has gone to court over this, arguing that the calculations used to judge its products are ‘wrong’ because they look only at the dry cereal, and not with the nutritional benefits of milk.

These new rules, which come into effect in October, are part of a package of measures that the Government is rolling out in an attempt to curb the recent alarming surge in obesity rates, particularly in children – the latest data from 2021 show that 40 per cent of children in year six (aged ten to 11) are overweight or obese, with the proportion in the obese range increasing from 21 per cent in 2019/20 to 25.5 per cent.

The rules target foods that are high in calories, saturated fat, sugar and salt (HFSS), banning them from high-profile locations such as aisle ends

Doctors tell me they’re seeing increasing numbers of young children with type 2 diabetes, liver disease and needing masks to provide oxygen at night, all because of the excess body fat they’re carrying.

Led by Boris Johnson, who blames his near-fatal brush with Covid on being overweight, a number of modest measures are being put in place to curb our ever-growing addiction to junk food. Not surprisingly, Big Food – the companies that manufacture so much of what we eat – is fighting back.

I will concede that, unlike most junk foods, cereals are often fortified with minerals and vitamins, and I’d also agree that adding milk makes those cereals a little healthier.

But that doesn’t reduce the amount of sugar you are eating. And we also all know people who happily snack on cereal straight from the box.

Some of Kellogg’s cereals, such as Crunchy Nut and Frosties, are 35 per cent sugar (sugar is the second listed ingredient, after maize in both). Eat 50g of Crunchy Nut or Frosties, which isn’t much, and you will be consuming more than four teaspoons (17.5g) of sugar. And that is before you add extra sugar (which many children do) or pour on orange juice, rather than milk, which I’m told is a ‘thing’.

Like other foods that are high in fat, salt or sugar, from October, high-sugar cereals can’t be placed within three meters of the front entrance, at the end of aisles or near the tills. These, of course, are the places where shoppers are most likely to make impulse purchases and are very lucrative spots.

When I was making a recent documentary, Who Made Britain Fat ?, I was taken round a food store (not a supermarket, not one of them would let us film) by Joe Harriman from retail consultancy Iri.

He pointed out a number of ways in which supermarkets and food giants might try to circumvent the new regulations – for instance, moving displays just a little further away from the entrance or the tills, near enough still to have an impact on shoppers but far enough away to get round the three-meter rule.

They could also try more imaginative ways to draw attention to high-profit junk food offerings, such as having plasma screens above the appropriate aisles, with flashing lights to draw your eyes and make you want to buy.

It is worth their while to try to get around the rules – as Joe Harriman explained, Iri’s research suggests that UK consumers spend £ 1.7 billionn a year on products placed in these prominent spots. To emphasize what a big deal the new rules really are, he added: ‘These changes are of a magnitude we’ve probably not seen before. I’ve heard it described as the biggest impact the Government has on our eating since rationing in the war years and after. ‘

If food manufacturers really can get us to spend £ 1.7 billion on their products simply by placing them in particular spots in a store, you can see why they will fight tooth and nail to resist changes that would mean the shops have to put the tempting goods in less prominent places.

But will these new regulations really make a difference to how much junk food we buy? The fact that Kellogg’s is going to court suggests it fears it will. And unlike other recent laws which are designed to reduce obesity, such as making restaurants and fast-food outlets put calorie labels on their foods, I think supermarket curbs really could make a difference.

A study by Cambridge University in 2018 found that when supermarkets removed treats from near the tills, this led to a 76 per cent fall in the sales of sweets, chocolates and crisps – which shows how much of the junk food we buy comes down to impulse buys and pester power from our children.

And next January, and likely to be even more fiercely fought, we should see the introduction of new laws curbing the power of Big Food to advertise products to children (before the 9pm watershed on traditional broadcast media and across paid-for online platforms).

Frankly, I think it is about time. We’re facing a huge and growing health crisis. Children who are obese are five times more likely to become obese adults than children who are a healthy weight.

Prevention is far better than cure and that’s why I’m hoping that Kellogg’s legal challenge will be tossed and toasted.

It’s time to cover up

It’s only May but already ultraviolet (UV) light being belted out by the sun is as high as mid-August.

That means it’s time to start taking precautions not to get sunburnt.

The problem with current sunscreens is that they’re not 100 per cent protective – what they need are more antioxidants, or so argues Dr Charareh Pourzand, a researcher from the Center for Therapeutic Innovation at Bath University. Sun cream works by blocking or absorbing UV light, thereby lowering the amount of damaging free-radical molecules created on your skin.

Dr Pourzand and her team have identified antioxidant compounds in nuts, seeds, bark and flowers that, at least in the laboratory, help protect the skin.

The hope is that adding these compounds to sunscreens will make them more effective.

In the meantime, cover up. 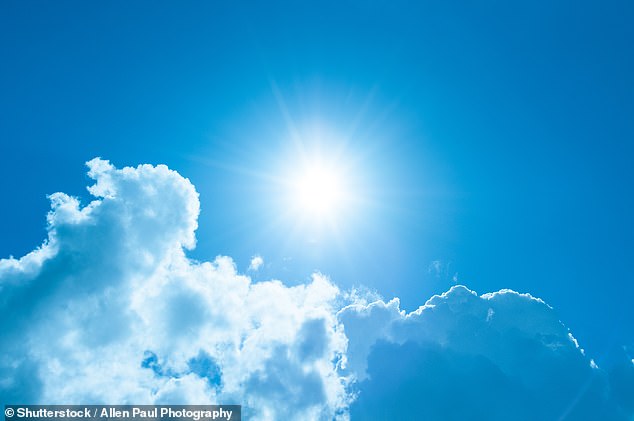 It’s only May but already ultraviolet (UV) light being belted out by the sun is as high as mid-August. That means it’s time to start taking precautions not to get sunburnt

The scan every man over 65 must have

A couple of weeks ago I received a letter about a free NHS abdominal aortic aneurysm (AAA) screening.

This quick and simple scan – offered to men over 65 – checks the aorta, the main artery in the body, for signs of a bulge or aneurysm. If this leaks or ruptures it can cause a catastrophic haemorrhage and rapid death.

The test is offered to men my age (65) and older because we’re at higher risk (women aged over 70 are also included if they have high blood pressure or cholesterol, or a history of heart disease).

The danger of an AAA is that problems can occur suddenly – if your aorta leaks or bursts there’s an 85 per cent chance it will kill you, even if you get to hospital.

A close friend, who is super fit, had a partial aortic rupture before Christmas. He has no memory of what happened but his wife says he complained of chest pain and became confused.

She rang 999 and he had an emergency operation. He mercifully survived, but months later, he still gets breathless and light-headed when he pushes himself. Although AAAs do not usually cause symptoms, warning signs include a pulsing sensation in the gut (like a heartbeat), gut pain that does not go away and persistent lower back pain – see your doctor if you have these symptoms and are in the at- risk group. If you develop sudden, severe pain in the gut or lower back then you need urgent investigation.

AAA screening will be joining an ever-lengthening list of screening tests I’m having as I get older.

In the past six months I’ve been screened for bowel cancer and had a PSA test for prostate cancer. I also check my blood pressure and blood sugar levels with home kits and keep an eye on my waistline. None of this will guarantee me a long and healthy life, but I hope it all stacks the odds in my favor.